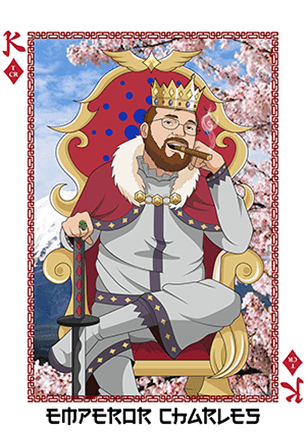 Born into the Imperial Family of Japan, the young Charles studied Kenjustu under Sensei Masamune before travelling widely across the world, founding Cardano in 1340. He finally returned to Japan, winning series 5 of Tekeshi's Castle and the beautiful skull jade ring. We honor Emperor Charles and the launching of Cardano in Japan.

Note: There are also 9 with laser eyes minted at the 'Epic' rarity level.